A Perceptive Lutheran’s Comments on my Church 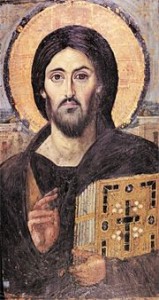 I’m going to talk about something a bit closer to my heart than I usually put on this blog. For my own peace of mind, and to share an image that I love, I included a picture of my favorite icon: the “Sinai Christ” icon. This is a famous religious image in my church, the Orthodox Christian Church. The original is found at St. Katherine’s monastery on Mt. Sinai, and dates to the seventh century A.D. It was copied from a second century icon that tradition indicates was a copy of a portrait of Christ painted by St. Luke the Evangelist, author of one of the four Gospels. Sometimes I need a visual reminder of what really matters; this icon fills that need and to spare. :-)

Unfortunately, I must start with a less inspiring topic. Some of my non-Orthodox Christian readers (including my Evangelical Protestant husband) aren’t sure what to make of the current kerfluffle in my church, the Orthodox Church in America (OCA). A quick summary: the top-ranking bishop in the OCA (Metropolitan Jonah) and the other bishops in the church are not getting along. There have been accusations and statements on both sides that reflect very different views of why this is the case. Although I have an opinion about which side is more credible, I don’t know the full story. Nobody does except God, and perhaps a very small group of insiders.

This evening I found a surprisingly good commentary on this situation and the larger issues facing my church, written not by a fellow Orthodox Christian, but by a Lutheran minister named Peter Berger. I don’t agree with everything that he says, but I think that most non-Orthodox American Christians will find his commentary readable, comprehensible, and helpful in understanding the Orthodox Christian Church as a whole, its jurisdictions (similar to denominations), and the issues that it faces in America.

I’m not writing this blog because of the issue among the hierarchs of my church, though, but to pay tribute to somebody that I was reminded of when I read Rev. Berger’s article. I’m one of the 4% of Americans in my generation (according to the Pew Survey of Religion in America) who was raised with no religious affiliation, but that is currently a practicing member of a specific religion. Like most of my group, I didn’t simply join my current church. As early as I can remember, I believed in God, although I would not have known to use the name “God” until I was eight or nine. I stumbled and wandered my way to my current Christian faith, helped along the way by a number of people and churches.

One I remember with great gratitude is the pastor of the local Missouri Synod Lutheran Church that my junior high school friend and her family attended. I went to confirmation class with my friend for over a year, and this pastor greatly reduced my ignorance of the basic theology and history of Christianity. Although I ended up in a different church, I’ve never forgotten the light in this man’s face as he talked about Jesus Christ. There are many religious fakes and charlatans out there; I was blessed to meet the real thing so early in my journey into Christianity, almost forty years ago now.

Pastor Brill is one reason among many that I don’t take confusing and embarrassing situations like the current conflict between the OCA bishops and the Metropolitan too seriously. The Christian church, like any other group of humans, exhibits the flaws and sins of its members. It also exhibits a few people who have largely overcome those “same old/same old” characteristics of ordinary human beings. Pastor Brill was one of that number.

He’s also one reason that I make a poor sectarian, however hard I’ve tried to be one over the years. ;) Apparently God does not want for me to believe that one little group is right and everybody else is wrong, because every time I try, a counter-example comes along. The other reasons that I make a poor sectarian are mostly other people who have also managed to exemplify in some way what it means to be Christian, or simply a faithful believer in and follower of God, or (in a few cases) somebody who does not believe in God but still manages to believe in and love other human beings well beyond any rational measure. I’ll probably talk about them from time to time here; they deserve to be remembered too.

This entry was posted in Personal, Religion. Bookmark the permalink.