Yesterday a major urban fire broke out in Reno, Nevada, where I live. My husband Joe and I were already planning to visit his family over Thanksgiving, so we packed quickly, took a few things that we really didn’t want burned, and left a day early. Twenty years ago in the San Francisco Bay area I had watched as the Oakland Hills fire just west of me burned for several days, incinerating over a thousand houses and a number of people. I learned then that, when a large fire starts in an urban area, you REALLY don’t want to stick around unless you’re helping to fight it or take care of the victims.

That meant that we spent an extra night in Lee Vining, California, 120 miles south of Reno in the Eastern Sierra Nevada mountains by Mono Lake. Today we enjoyed ourselves. Joe took pictures. I thought I’d share. 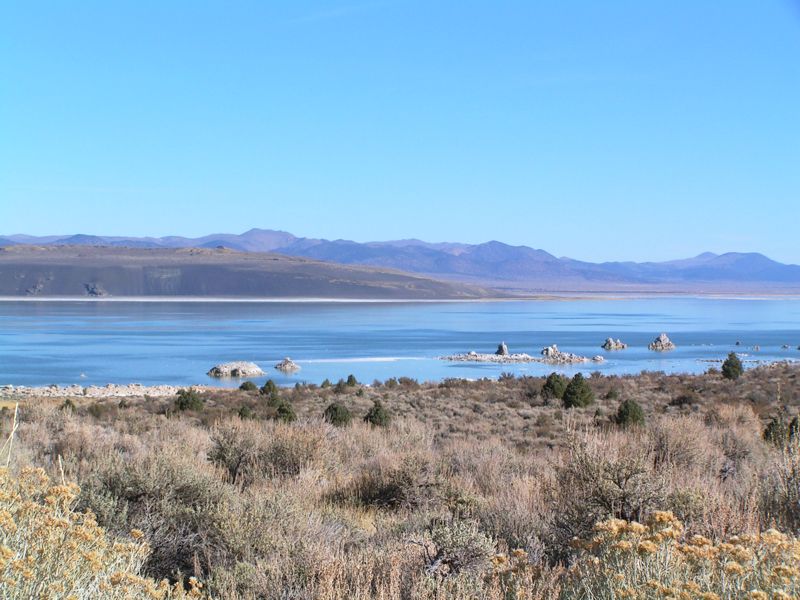 First, we drove along the western shore of Mono Lake. This lake is one of the oldest in North America; geologists believe that it formed over 3/4 of a million years ago. It’s in a “terminal basin”, meaning that water that flows into it can’t escape except by evaporation. In other words, it’s a tiny ocean, and like other lakes in terminal basins is extremely salty and also full of other chemicals. The funny looking white formations that stick up above the lake near the shore in this picture are called tufa. They are formed when some of the minerals in the lake are deposited there, much as stalactites and stalagmites in caves are formed.

Three creeks flow into Mono Lake. Below is a picture of one of them, Lee Vining Creek:

After a quick consultation, Joe and I agreed that we really did not feel like driving through the creek, so we turned back and instead headed for Bodie State Park. Bodie was a mining town built during one of the last gold rushes in the American West, in the early 20th century. It survived through the Great Depression and was abandoned during WWII after all remaining gold mines were shut down for the duration of the war. The buildings in Bodie are amazingly well preserved: instead of the foundations and scatters of broken glass and cans you see at most mining site ghost towns out this way, many buildings still stand.

Here’s a picture of the Methodist Church, seen as you walk into town from the parking lot: 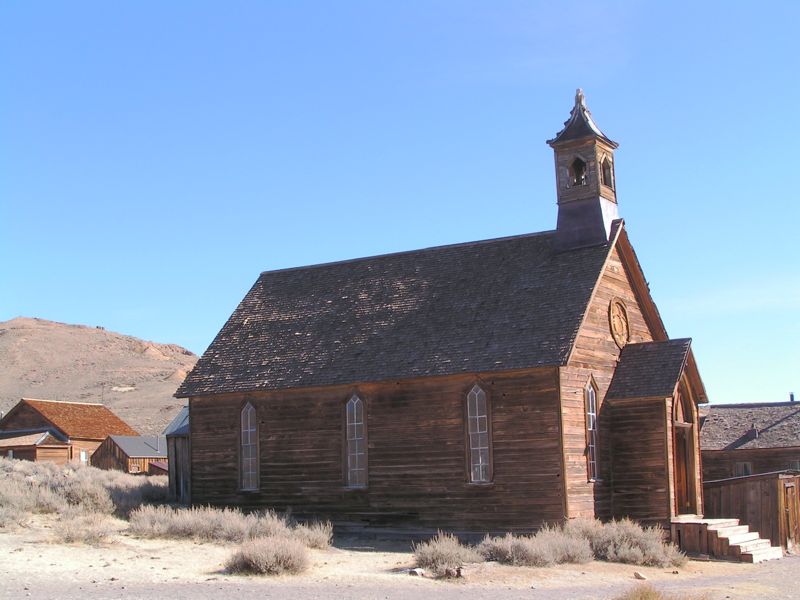 The porch is a bit shaky; Joe commented to me that they really should fix it or fence it off, or somebody was going to break through and fall a few feet. But it held up for him.

Walk about seventy feet further down the main street of town and you come to the home of James D. Cain, the largest landowner in Bodie during its height: 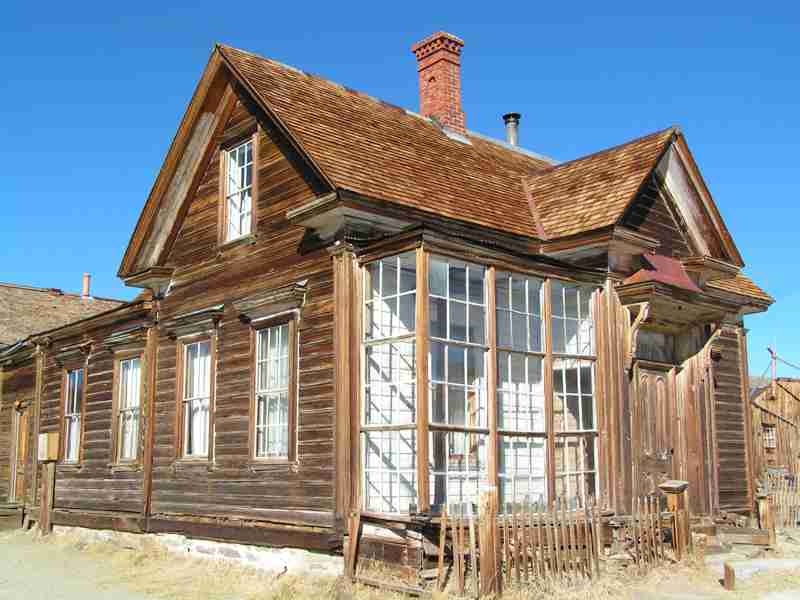 The house is two stories; a surprising number of buildings in Bodie were. The sun porch is lovely, and still weathertight will intact glass. It currently serves as the Bodie ranger station. (I don’t blame the rangers — if I were stationed at Bodie, this is where I’d want to sleep!)

Many of the buildings in town burned in the late 1932, but fortunately the town’s biggest structure — the Standard Mill, the town’s gold mill — was a few hundred feet out of town and the fire did not reach it. Here is a picture of the mill complex, which is mostly intact to this day: 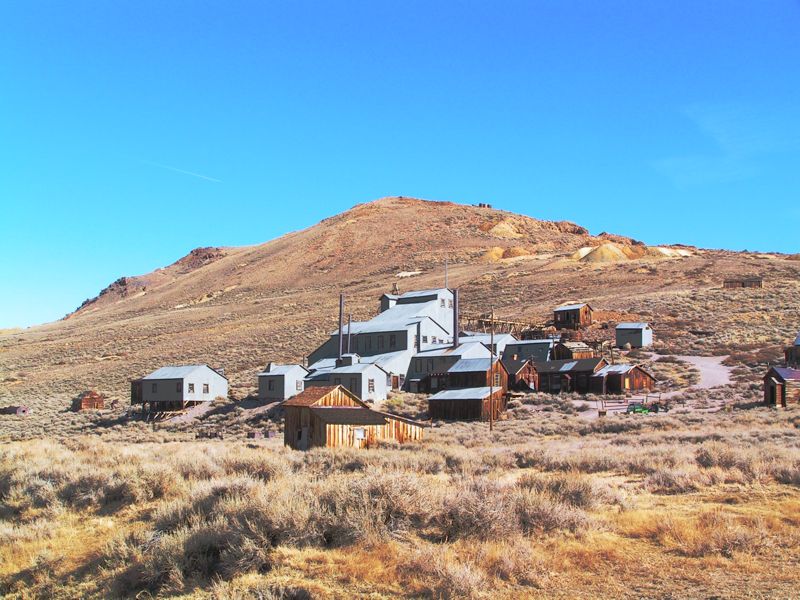 During the summer there are guided tours through the mill, but Bodie is mostly shut down for the winter now. Today was a nearly perfect day to walk around, but the town is at over 8,000 feet and the snows will arrive soon.

After we’d wandered through town and chatted with a ranger, we headed back down to U.S. 395. Joe took this picture of the eastern Sierra Nevada mountains as seen from the road, at around 8,000 ft/2500 meters altitude: 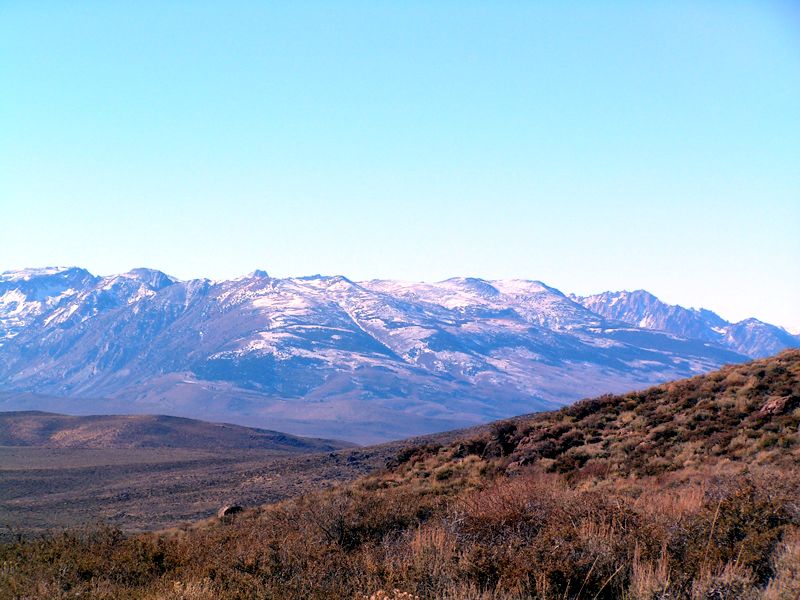 As lovely as that picture is, it doesn’t do justice to the scene. There are not many mountain scenes that match those in the Sierra Nevadas, and this is one of the best of the Sierras. If you haven’t seen them for yourselves, you should take the time to drive up (or down) U.S. Highway 395 between Reno, Nevada and the southern end of the Owens Valley near Owens Lake, a few miles south of Lone Pine, California. California is full of breathtaking scenes; these are some of the best of them and it isn’t even crowded here. :-)

This entry was posted in Environment, Science. Bookmark the permalink.